What you said…in September about Tech!

“I recently visited the 40-acre site near Gratiot Lake where a classmate and I viewed the area where we planted red pine seedlings with a planting machine in 1958. The seedlings we planted then were three logs high and measured about 10 inches diameter breast high.” -Larry Golin ’58 Forestry

“I’m starting a new job thanks to a connection with a fellow MTU alum who works there. Totally random connection too, she saw me wearing a Michigan Tech hoodie waiting for lunch at a food truck and said hi. She was working for another mining consulting firm at the time and we stayed in touch ever since. That is one of the best parts of my degree from Tech is the instant connection you have with other alums.” –Walt ’08 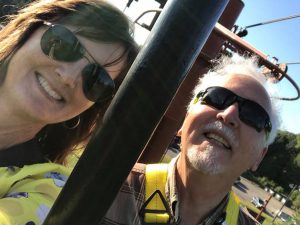 “Funny story: This weekend I was at a Ski Patrol meeting and during that meeting we did a bit of training. My training partner, from Minnesota, turned out to be, likely (since there were only two at the time and he looked familiar), my statistics prof from Tech!!! Such a small world. For alumni reading, it was Peter Wollan. I was at Tech from 88-92. I didn’t have the heart to tell him I hardly attended his class. It was part of my “Thematic” 9 credits. Not a clue what the other 6 credits were.” – Kaet ’92

“Have his autograph on my diploma.” – Ellie C.

“I graduated in 2014 and moved to the East Coast afterwards. I still keep my 906 phone number and I am proud of it. Reminds me of good old days back at Tech.” – Jasem B.

Comments from a post about the Tech Wives cookbook

“I met my husband at Tech… although while in school (late ’90s) we were all about the $0.99 Whopper Wednesday! I do use a B&B recipe variation to make my pickled eggs.” – Stacey K.

“I’m not sure when the Michigan Tech Wives Club ended. It was for wives of MTU students. I think early 80s.” – Cynthia H.

“Though I fundamentally disagree with the decision, it will be interesting. The case for wolves in Yellowstone and ISRO are vastly different, and it feels to me like the park has gone out of its way to ensure an allure for visitors and continued research, for a “playing god” philosophy that is inherently in opposition to the core values of the NPS. Still, interesting!” – Darren T.