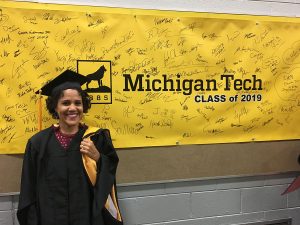 Commencement ceremonies took place at 10:30 a.m. Saturday, May 4, in the John MacInnes Student Ice Arena in the Student Development Complex. Here’s a look at Michigan Tech’s class of 2019.

What you said in April about Tech

“Kind of a blur, really, but walking across the stage and shaking hands with the University President (who I knew casually) was awesome.” -Jim A

“the best part was having No finals and being able to party and have fun all week while my undergrad roommates were studying their butts off.” -Griff C

From “April is for Fools”.

“I recall when one guy in Coed Hall went downstate for the weekend, we unscrewed the tiny little screws on all of his TDK cassette tapes and put the actual tape into differently labeled cases. So, when he returned and popped in a tape labeled “The Doors”, he might have gotten “The Smiths”, instead. He was furious and just started scribbling the real contents over the fake contents. This was 1983, I think.” -Carl C

“It was November of 1971. We were juniors and decided not to make the long trip home for Thanksgiving in favor of a long weekend of jollity. One of the gang, Duane, had a reel-to-reel tape recorder and a collection of reels of music. His, and our, favorite was the Moody Blues “Days of Future Past.” To prank Duane we chipped in a bought a reel of blank tape and used it to spider-web his room on East Coed Hall 5th floor. We did a masterful job of it. Then we spun Days of Future Past onto the newly empty spool and suspended Duane’s now-empty labelled spool from the web to complete the prank. Duane entered his room later to discover and fell for the prank. We spilled the beans but he still stormed out only to return later that night and turned the prank on us by un-webbing the tape back onto a spool to use for more music. And we all helped. I know this is true because I am among the guilty party!”  Richard H.

“A friend of mine was a CS student, and she had written a program on punch cards that played solitaire. The playing cards were represented by a 52-card data deck located after the program deck and denoted by an ink stripe along one edge. She would wait in line at the card reader and when it was her turn she would cut the deck (isolating the data deck), shuffle those cards and return them to the rest of the deck, while remarking something like “Well maybe NOW it’ll run!” to the horror of the onlookers. Circa 1977.” -Todd J.

“It was 1971. We were Juniors in East Coed Hall 5th floor. Our freshman friend, whom we called “The Falcon” made a point each night to call his girlfriend in the Lower Peninsula. Dorm rooms in those years had a Touch-Tone wall phone and AT&T offered Nickle-a-minute long distance beginning 10 PM each night. That was so popular that it was difficult to get a dial tone between 10 and 11 PM. Being engineering students, we had already found a solution for annoying phone calls. A simple internal adjustment to the phone bell caused it to be silenced when set for minimum ringer volume and we used it as an on-off switch for incoming calls. We had snuck into The Falcon’s room and made sure his ringer was off. The plan was to call his number one minute before 10 PM. He would not hear the bell and when he picked up the phone for his call he would simply be answering our call. But we knew we couldn’t keep silent while he was frustratingly waiting for a dial tone. So we unscrewed the handset and removed the microphone from our phone. We could laugh as we listened to him hanging up, picking up again, cussing at the phone lines. It was great fun! We kept him going for 45 minutes until he managed to disconnect and pick up before we could re-dial.

The next day at supper I casually quoted one of his frustrations to spill the beans. He knew he’d been had and we all had a good laugh together. The Falcon knew he was truly one of the gang.” -Richard H.

“it was 1972, our gang’s senior year. We had an apartment in a big house across town at the bottom of 6th Street. The landlord lived below and there were three apartments on the second and third floor. The gang had gotten smaller over the four years and those remaining were together in those apartments. We helped with a junior hockey team sponsored by Crown Bakery with most of the team living in the neighborhood so we knew we’d have callers for Halloween. The guys across the hall had homemade Caramel Apples for the kids. That went over great. At the end of the evening there was one Caramel Apple left over. My buddies decided I merited the treat. But I knew them well. This could be a prank… I bit into the treat with care and found it overloaded with thick caramel. Not bad. The second bite proved my suspicions as I discovered the Caramel Tomato. I think it was I who laughed the hardest as I scrapped off the caramel to eat and discarded the tomato. Those were good days.”  -Richard H.

“My friends filled my dorm room in West Coed Hall (now McNair Hall) with newspaper, wall-to-wall & floor-to-ceiling while on was on a job interview one weekend. I was the RA and so I lived alone and left my keys with my friend to feed my Piranha. When I came back that Sunday I was followed to my room where I could barely open the door. We had tons of fun borrowing through the wadded up paper.

Later that night we had filled a dozen trash bags along with several cylindrical bags used by the trash compactor. When then took two trash bags and one cylindrical bag and staked it waist high on the 50-foot snowman, which was built for a snowman contest, and was in front of the frat house next to Wadsworth Hall. It remained there until mid morning. We also hung one in the courtyard of West Coed until the dorm Manager called me to have it removed.“ -Mark M.

“In the fall of 1973 when the Bogue Boys were first getting started, we lived in a house on Hubbell Street. When one of our roommates, Max, went home downstate for the weekend, we “borrowed” his car to use it in the Homecoming Hobo parade. Took the back seat out and placed it in the trunk and marked up the black car with white shoe polish. Of course we had to leave the car as it had been “reconditioned” it so Max could appreciate the handiwork when he returned.” Rick W.

From “What you Said in March”

“Never north of the Bridge until my parents brought me up from Detroit for my freshman year, 1966. Back then all the frosh came up a week before classes started for Orientation. I loved it! Five years later I left with a degree and a wife (one of the few coeds). I think the ratio was about 22:1 at that time. We’re still Yoopers!” -John B.