WLUC TV6 aired a story about students at Calumet-Laurium-Keweenaw Elementary School building a boulder garden. The project is funded by a Michigan Space Grant Consortium geoheritage pilot grant to Michigan Tech to create boulder gardens and rock walks at CLK and E. B. Holman Elementary Schools, using representative rocks of the Keweenaw.

Students are also designing interpretative signage to accompany the installations with info about rock types and how geology has influenced life in the Keweenaw. 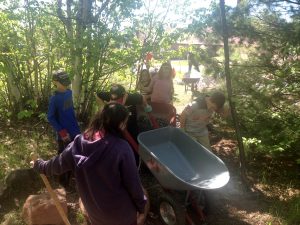 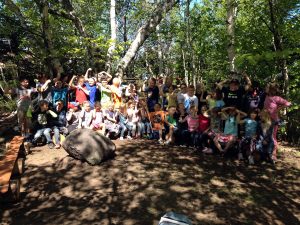 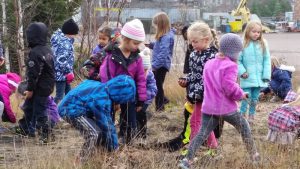 Correspondence on the Michigan Mineral Alliance 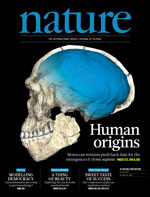 The prestigious journal, Nature, published a correspondence last week titled “A rescue package for imperiled collection” by Ted Bornhorst, executive director of the A. E. Seaman Mineral Museum, along with co-authors Chris Poulsen, chair and professor of earth and environmental sciences at the University of Michigan and Rod Ewing, professor in the Department of Geological Sciences and Frank Stanton, professor in nuclear security at Stanford University.

The first time I saw Lake Superior, I had no words. I couldn’t describe the majesty of this tremendous body of fresh water.

Growing up on the East Coast of Canada, I didn’t think much could rival the mighty Atlantic Ocean. I discovered how wrong I was when I moved to Michigan’s Keweenaw Peninsula seven years ago to study geoscience education at Michigan Technological University in Houghton. Since then, my love for the Lake and my curiosity about the region have grown.

The Ontario Geological Survey, Ministry of Northern Development and Mines and the A. E. Seaman Mineral Museum teamed up to co-host the 63rd Annual Institute on Lake Superior Geology held in Wawa, Ontario May 8-12.

The meeting was attended by 137 geologists from the US and Canada. Academic institutions (58 members), government agencies (28 members), and mining and consulting companies (36 members) were well represented among attendees.

The Institute publishes technical volumes in hard copy for each meeting and offers them open-access online after the meeting is completed.

The Institute is well regarded for its high quality field trips having recently won a national award from the Geoscience Information Society for the Outstanding Geologic Field Trip Guidebook Series.

The Institute initiated a new annual award for 2017, Pioneer of Lake Superior Geology, to recognize those individuals who made significant contributions to the understanding of the geology of the Lake Superior region primarily prior to the Institute’s awarding of the prestigious annual Goldich Medal in 1979.

The first Pioneer of Lake Superior Geology is Douglass Houghton (1809-1845). Bornhorst nominated Houghton for the award and wrote, along with Larry Molloy, President of the Keweenaw County Historical Society, the two-page biographical sketch published in the Proceedings Volume. As the first speaker for the technical sessions, Bornhorst provided the highlights of the important attributes that contributed to Houghton’s success.

James DeGraff (GMES/GLRC) is the principal investigator on a project that has received a $27,500 research and development contract from the US Geological Survey. The project is “The Keweenaw Fault Geometry, Secondary Structures and Slip Kenematics Along the Bete Grise Bay Shoreline.”

Huntoon on Diversity in Geosciences

A new report reveals that increasing numbers of women are studying and working in the geosciences, but the field continues to lag in attracting underrepresented groups.

Jackie Huntoon, the provost and vice president for academic affairs at Michigan Technological University in Houghton, has previously researched diversity in the geosciences and addresses it head-on in her current role. Increases in race and ethnicity are just not happening, she said.

The number of Ph.D.’s awarded in a field tells an important story because the number indicates what is happening at the leadership levels, according to Huntoon.

Nasa scientists warned that the volcano may have spewed out large amounts of sulphur dioxide (SO2), which is harmful to human lungs.

The higher SO2 amounts downwind could be due to multiple factors, including variable emissions at the volcano (such as an initial burst), increasing altitude of the plume downwind or decreasing ash content downwind,

Read more at the Daily Mail, by Will Stewart. 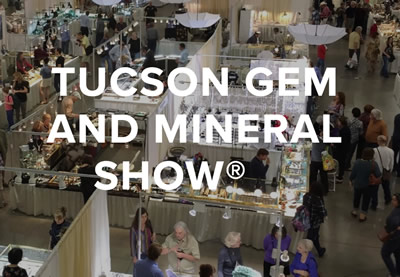 The A. E. Seaman Mineral Museum announces that one of its specimens is featured on the poster commemorating the 2017 Tucson Gem and Mineral Show (TGMS).

The specimen is a 13 cm copper crystal group from the Phoenix Mine in Keweenaw County. The specimen is among the finest copper specimens in the museum’s holdings. It was donated to Michigan Tech by Lucius L. Hubbard circa 1917.

Read more at Tech Today, by the A. E. Seaman Mineral Museum. 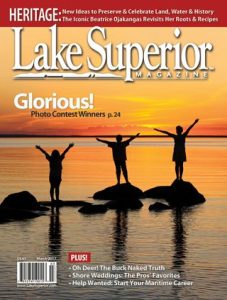