Timothy Havens, the William and Gloria Jackson Associate Professor of Computer Systems, has co-authored a paper recently published in The Journal of the Acoustical Society of America, Volume 50, Issue 1.

The work described in the paper was funded by the United States Naval Undersea Warfare Center and Naval Engineering Education Consortium (NEEC) (Grant No. N00174-19-1-0004) and the Office of Naval Research (ONR) (Grant No. N00014-20-1-2793). This is Contribution No. 76 of the Great Lakes Research Center at Michigan Technological University.

Conventional direction-of-arrival (DOA) estimation algorithms for shallow water environments usually contain high amounts of error due to the presence of many acoustic reflective surfaces and scattering fields. Utilizing data from a single acoustic vector sensor, the magnitude and DOA of an acoustic signature can be estimated; as such, DOA algorithms are used to reduce the error in these estimations.

Three experiments were conducted using a moving boat as an acoustic target in a waterway in Houghton, Michigan. The shallow and narrow waterway is a complex and non-linear environment for DOA estimation. This paper compares minimizing DOA errors using conventional and machine learning algorithms. The conventional algorithm uses frequency-masking averaging, and the machine learning algorithms incorporate two recurrent neural network architectures, one shallow and one deep network. 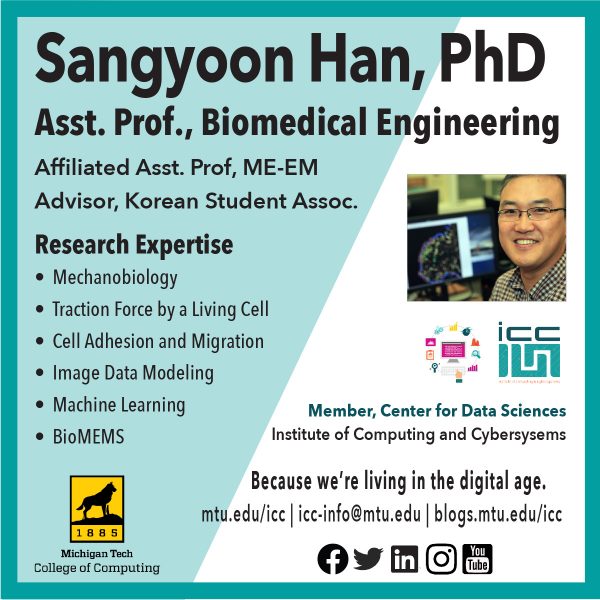 Han recently joined the Institute of Computing and Cybersystems and its Data Sciences research group. His primary research interests are in mechanobiology, cell migration, and image data modeling. His research goals include applying computer vision to microscopic images to capture meaningful information, and he’s looking for collaborators.

Han enjoys teaching and interacting with students, “and feel their energy, too.” He says he makes a deliberate effort in his classes to pause from time to time so that his students can ask questions.

“Nik is working on finding myosin-independent mechanosensitivity mechanism for stiffness sensing, and Mohanish works on the project finding mechano-transmission for fluid shear stress sensing by endothelial cells,” he says.

Han’s Mechanobiology Lab is interested in finding fundamental mechanisms governing mechanotransduction, and how cells sense mechanical forces and convert them into biochemical signals.

Han is working to gain a thorough understanding of the mechano-chemical interaction between cancer cells and their microenvironment, and develop a an effective mechano-therapeutic strategy to stop the progression of cancer, and breast cancer in particular. Ultimately, he wants to apply that knowledge to cancer mechanobiology

Han is principal investigator of a three-year NIH/NIGMS research project, “Nascent Adhesion-Based Mechano-transmission for Extracellular Matrix Stiffness Sensing.” The research aims to determine whether newly-born adhesions can sense tissue stiffness through the accurate measurement of the mechanical force and molecular recruitment of early adhesion proteins.

In 2012, Han received his Ph.D. in Mechanical Engineering from the University of Washington in the areas of cell mechanics, multiphysics modeling, and bioMEMS.

For his postdoctoral training, he joined the Computational Cell Biology lab led by Dr. Gaudenz Danuser in the Cell Biology department of Harvard Medical School. In 2014, he joined the UT Southwestern (University of Texas) Department of Cell Biology and Bioinformatics. Han received his B.S and M.S. degrees in mechanical engineering at Seoul National University, Korea, in 2002 and 2004, respectively.

Han holds several patents and in 2015, he developed an open-source TFM (Traction Force Microscopy) Package, which is shared via his lab’s website: hanlab.biomed.mtu.edu/software.

Beyond Research and Teaching

Han loves science and discovering something new in his research investigations. Beyond his work as a professor and scientist, he describes himself as a husband to Sunny, and a dad to his son, Caleb.

“I am just a normal Korean who likes singing and dancing,” he says. “Unfortunately, my voice is still recovering from surgery, but I hope to get back to it soon. I also like to listen to all kinds of music, including hip-hop, classics, and pop.”

He appreciates a good sense of humor, but he says that being humorous in American English is something he continues to learn.

Han says he tries to be “normal” and not too nerd-like when he’s not pursuing his research, but “there are times when I am making my own hypothesis about some phenomena I observe in my daily life.”

Han enjoys life at Michigan Tech and in the Cooper Country. He likes getting to know his energetic students and he finds Michigan Tech faculty members very strong and collegial. He also enjoys the snow, hockey, and the mountains.

“I really like the snow here. I am already sad that the weather is becoming too mild!” he confirms. “It’s also a safe environment to raise kids, which is a big plus.”

And he likes his academic department. “Everyone is so nice in the Biomedical Engineering program, they have been so welcoming and appreciative my research,” Han says. “It’s a family-like environment.”

The Mechanobiology Lab studies mechanobiology, particularly how adherent cells can sense and respond to mechanical stiffness of the extracellular matrix. To investigate this, the lab has established experimental and computational frameworks for force measurement and adhesion dynamics quantification. Researchers apply these frameworks, with cutting edge computer vision technique, on live-cell microscope images to investigate the fundamental mechanism underlying mechanosensation in normal cells, and the biomechanical signature of the diseased cells whose signaling has gone awry.

The Institute of Computing and Cybersystems (ICC) creates and supports an arena in which faculty and students work collaboratively across organizational boundaries in an environment that mirrors contemporary technological innovation. The ICC’s 60+ members, in six research centers, represent more than 20 academic disciplines at Michigan Tech. https://www.mtu.edu/icc/

The ICC Center for Data Sciences (DataS) focuses on the research of data sciences education, algorithms, mathematics, and applications. https://www.mtu.edu/icc/centers/data-sciences/

The National Institutes of Health (NIH), a part of the U.S. Department of Health and Human Services, is the nation’s medical research agency — making important discoveries that improve health and save lives. https://www.nih.gov/

The National Institute of General Medical Sciences (NIGMS) supports basic research that increases understanding of biological processes and lays the foundation for advances in disease diagnosis, treatment, and prevention. https://www.nigms.nih.gov/ 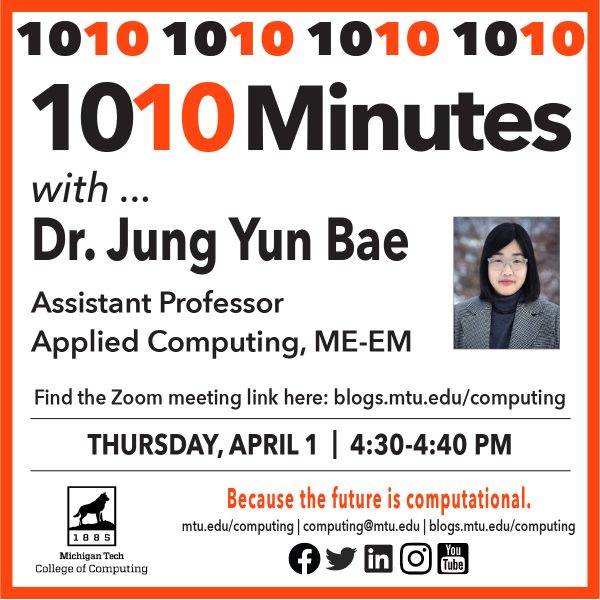 Dr. Bae is an Assistant Professor in the Applied Computing and Mechanical Engineering-Engineering Mechanics departments.

She will discuss her research, the Applied Computing department, and answer questions.

Dr. Bae earned her Ph.D. in Mechanical Engineering at Texas A&M University and worked as a research professor at Korea University before she joined Michigan Tech.

We look forward to spending 1010 minutes with you!