The Dean’s List for SPH and SAP physics majors is available for Fall 2012 under Physics Awards and Achievements. Congratulations to all the majors! 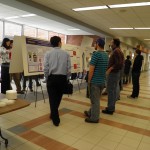 The best graduate student talks and posters 2013 have been found by popular vote. As in previous years we had two clear favorites in each of the two categories. And the winners are:

The Physics Department Poster Session was held on April 18, 2013, in the Fisher Atrium. The physics graduate students were held throughout the latter part of Spring Semester 2013.

Congratulations to the four winners and everyone else on their presentations!