In the Department of Social Sciences, Chelsea Schelly was awarded $5,000 for Bringing Small-scale Distributed Solar Technology to Campus.

The InterAmerican Institute for Global Change Research issued the call for Interdisciplinary Science Integration Grant proposals that study the integration of social and natural sciences.

New Book by Barry Solomon on Sustainable Development of Biofuels 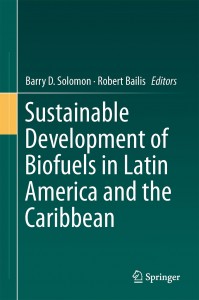 Half of the people in Greenland have toxic levels of PCBs in their blood. A harmful cocktail of contaminants, including mercury and dioxin, has led to fish consumption advisories in all of the Great Lakes, including Superior.

The team members are undertaking a three-pronged research effort. First, they will estimate where the pollutants originate, describe the natural systems that transport them north, and identify where the pollutants finally land. Their models will offer predictions through the year 2050 and will account for the affects of climate change and changes in land use and cover and government policy relating to ASEPs.

Reflections of a Fair Historian: The Joys of World’s Fair Scholarship

From Architecture to Zippers: World’s Fairs and the Invention(s) of the Modern World

Beginning with London’s Crystal Palace Exhibition (1851) and continuing into our own time, the Shanghai World Expo (2010), world’s fairs have shaped the modern world. After briefly examining the history (and future) of world’s fairs, Professor Rydell will explore how a series of technological inventions and innovations that debuted at world’s fairs made the world modern. Visited by well over a billion people since 1851 (the Shanghai fair alone attracted 70 million), world’s fairs mapped mental and cultural landscapes and, not incidentally, made progress seem like great fun especially when it came at the expense of “others.”

If you have any questions regarding our events, please contact: Rebecca Graff, rsgraff@mtu.edu

Mind the Gap: Conflicting Legal Rules in the Arctic

Associate Professor Mary Durfee will give the talk “’Mind the Gap: Conflicting Legal Rules in the Arctic,” Friday, Nov. 15 at noon in Academic Office Building 201.

The Other Calumet: Steel and Subinterns in Southeast Chicagoland, Summer 2013

Winkler on Mapping US Migration

A project headed by Richelle Winkler (SS) was covered in an article by The Atlantic Cities online and also Maptacular on Tumblr.

You can tell a lot about a place by who doesn’t want to be there any more. Or, conversely, by who wants to move in.

Researchers at the University of Wisconsin, Michigan Technological University and the University of New Hampshire have built just such a database dating back to the 1950s. Their tool tracks net changes in population by county, all across the country…

Read more at The Atlantic Cities, by Emily Badger.

Net Migration Patterns for US Counties

Every year, about 10 million Americans move from one county to another. Migration rates vary by age, race, and ethnicity and with local and national social and economic conditions over time.

Image courtesy of the net migration mapping tool created by the Applied Population Laboratory at the University of Wisconsin.

Richelle Winkler’s research has been the focus of several news stories recently. She is featured in a recent issues of The Capital Times, Wisconsin State Journal, and Gizmodo. The articles discuss current US migration patterns.

A Map of Where Americans Are Moving (Hellooooo, Vegas!)

The coolest thing is playing with the data on the website, where you can cut and slice the data between counties and start to see some trends up close, especially when it comes to the age of who is moving.