Sue Hill is the Digital Content Manager for the College of Engineering.

The Vice President for Research Office announces the 2016 REF awards and thanks the review committees, the deans and department chairs for their time spent on this important internal research award process. Among the recipients are: 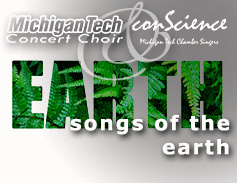 KSO Presents “Shakespeare at the Symphony” at Calumet Theatre 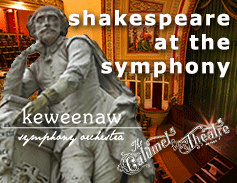 The KSO performs orchestral music inspired by several of the Bard’s plays, including “The Tempest” (Sibelius), “Hamlet” (Berlioz), “A Midsummer Night’s Dream” (Mendelssohn) and “Romeo and Juliet” (Berlioz and Prokofiev).

Music Director Joel Neves (VPA) says “the KSO is excited to perform at the historic Calumet Theatre for the first time since 2011. The music of Shakespeare is dramatic, expressive, colorful, inventive — the perfect companion to his plays. Our concert will be a revelatory experience for those who enjoy the fusion of music and literature. I look forward to sharing this with our patrons.”

Tickets are on sale now, $19 for adults, $6 for youth, no charge for Michigan Tech students with the Experience Tech fee. Tickets are available by phone at 7-2073, online, in person at the Central Ticket Office in the Student Development Complex or at the Calumet Theatre Box Office. 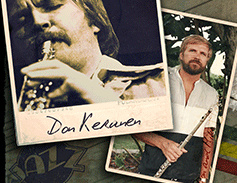 The R&D Big Band will perform “Little Sunflower” with the addition of interesting sound effects and a woodwind quintet. The Jazz Lab Band will feature vocalists Kattie Riutta and Kevin Rocheleau singing “Used To Rule The World” and “Diggin’ On James Brown,” respectively. The Jazz Lab Band will perform a classic composition from the library of the Buddy Rich Big Band entitled “Groovin’ Hard” written by Don Menza. In a more contemporary style, the R&D Band will funk-out on the Tower of Power classic “Soul Vaccination.”

In 2003, Jay Keranen developed an endowed award program in his father’s name. Two $500 amounts are awarded for Outstanding Jazz Musician and The Most Improved Jazz Musician. This year’s recipients will be announced during the evening’s concert.

Tickets for the Don Keranen Memorial Jazz Concert are on sale now, $13 for adults, $5 for youth and no charge for Michigan Tech students with the Experience Tech fee. Tickets are available by phone at 7-2073, online, in person at the Central Ticket Office in the SDC or at the Rozsa Box Office the evening of the performance. Note that the Rozsa Box Office only opens two hours prior to performances. 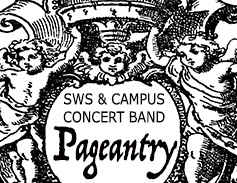 “Pageantry” is an evening of music created for large celebrations! From the music of Charles Gounod and John Philip Sousa to John Mackey and Winton Marsalis, come listen to music designed to make you feel the grandness and the thrill of important occasions.

Never been to a Superior Wind Symphony concert? It is the only Michigan Tech music ensemble composed entirely of non-music majors: chemists, engineers, physics, even math majors, make up the band.

Come to the “Pageantry” concert this at 7:30 p.m. Saturday, April 9 in the McArdle Theatre, and enjoy the show.

Tickets for “Pageantry” are on sale now, $13 for adults, $5 for youth and no charge for Michigan Tech students with the Experience Tech fee. Tickets are available by phone at 7-2073, online, in person at the Central Ticketing Office in the SDC or at the McArdle Theatre door the evening of the performance. 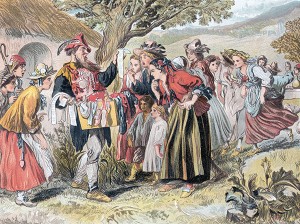 The Tech Theatre Company presents “The Winter’s Tale” by William Shakespeare this week.

One of the Bard’s later plays, it is a comedy which also provides intense psychological drama. “The Winter’s Tale” follows the story of two kings, childhood friends Leontes and Polixenes. The plot involves jealous rages, seeming betrayals, accusations of infidelity and Leonte’s refusal to accept his wife’s child as his own. Eventually, love reunites the characters in the end and all are redeemed.

“The Winter’s Tale” will be performed at 7:30 p.m. Thursday, Friday and Saturday nights, with a 2 p.m. Sunday Matinee at the Rozsa Center for the Performing Arts.

Tickets are $15 for adults, $6 for youth and Michigan Tech Students are free with the Experience Tech Fee.

From Tech Today, by VPA.

The curtain will go up tonight for the Tech Theatre Company’s latest production, “The Winter’s Tale,” in the Rozsa Center for the Performing Arts.

Published in 1623, “The Winter’s Tale” is one of Shakespeare’s later plays. Considered a comedy, it is also sometimes labeled one of the Bard’s late romances.

Providing both intense psychological drama and comedy, “The Winter’s Tale” leaves audiences with a romantic and happy ending as it follows a story of two kings who are childhood friends. There are violent storms, an insistence to abandon a child and even 16 years pass before love reunites the characters in the end and all are redeemed.

According to Director Roger Held, “The dreary English days twixt November and March are invariably cold, dark and damp. While snowfall is light, the east wind blows very cold and the wind from the south and west brings chilly rain. During the English Renaissance, the lack of central heating encouraged early bed times under multiple covers. Not-sleepy-children may have prompted the development of traditional Winter Tales … stories most often set in the long ago and far away and were cautionary tales, warning against bad behavior. The romantic writers and the Grimm brothers are descendants of this folk tradition that Shakespeare borrowed for [this] play.”

General admission is $15, youth tickets (17 and under) are $6, and Michigan Tech student tickets are free with the Experience Tech fee.

Tickets will also be available at the Rozsa box office two hours before each show. 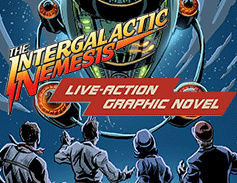 Music for a Sacred Space

Join the choirs of Michigan Tech as they present a concert to benefit the Society of St. Vincent de Paul.

The concert will feature the Michigan Tech Concert Choir and conScience, the Michigan Tech Chamber Singers performing sacred choral music performed in its natural habitat, the local treasure that is the magnificent space of St. Joseph Catholic Church.

The repertoire will range from “I Will Lift Up Mine Eyes” by John Rutter, to “Unclouded Day” arranged by Shawn Kirchner. Free will donations in any amount are welcomed.

From Tech Today, by Visual and Performing Arts. 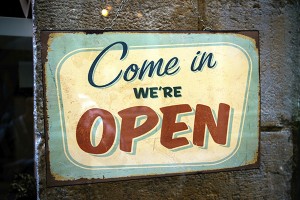 Join students from many different disciplines for a gallery reception of their art works-in-progress. This is a great opportunity to see creative work in process, and to visit with student artists to discuss their ideas. 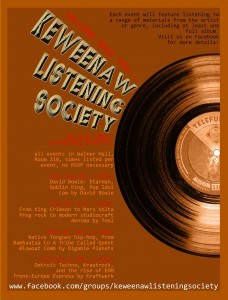 Keweenaw Listening Society is a semi-regular gathering centered around listening to and discussing some of the most interesting and important albums ever recorded. All Michigan Tech/VPA students, faculty, staff and their friends, families and their snacks are welcome to join us. Attendance is free, no RSVP needed.

Our next event is at 7:15 p.m. tomorrow (March 1, 2016) in Walker 210. We will be listening to legendary prog and hard rockers starting in the 70’s and progressing through to today. We will listen to the entirety of Tool’s “Aenima” and discuss its innovative production techniques.

Also join us at 6:15 p.m. Wednesday, March 23 in Walker 210 for an evening focused on Native Tongues Hip-hop and its evolution into backpack rap and other genres. We will listen to Digable Planets’ “Blowout Comb” in its entirety.

Finally this semester, join us at 6:15 p.m. Tuesday, April 19 in Walker 210 for Detroit Techno, Krautrock and the Birth of EDM, where we will listen to Kraftwerk’s “Trans-Europe Express” in its entirety.

Events typically last between two-and-a-half and three-and-a-half hours and always include a range of listening and discussion, including at least one full album.

All are welcome to attend (though keep in mind, not all material presented will be suitable for young children — these are typically events featuring adult content). If you can only attend part of the time slot, you are still welcome to join us when you are able. More information can be found on Facebook.