Share your story! Tell us your Tech Twosome story in the comments below. 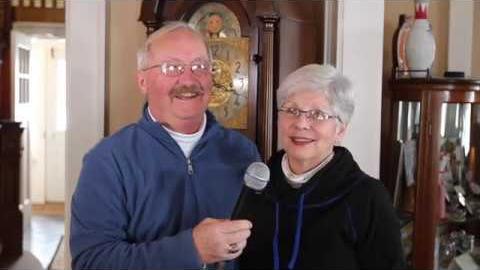 We are honored that Tech holds a special place in your hearts, as you do in ours. Celebrate this Valentine’s Day by spreading the love with a gift to Michigan Tech in honor of your special connection. Your gift helps the next generation of students write their stories.

Liz ’12 (Cloos) and Patrick ’12 Dreyer
We at the LeaderShape leadership camp in January 2009, the week before the spring semester of our freshman year. We started dating after only 12 days of knowing each other and have been together ever since.

During our senior year, we decided that we wanted to get engaged to get married. Patrick wanted to surprise Liz. His first idea was to “feign car trouble” on our way back to Michigan Tech from Detroit and pull off the road in Alberta where we first met three years prior. However, Patrick realized that the entire family would be VERY upset that they wouldn’t get to see the newly engaged couple for many months. So, Patrick shifted his plans and proposed to Liz in Detroit four days before Christmas.

Alissa ’17 (Alexander) and James ’15 Kanka
James and I met my first semester at Tech in fall of 2011 at Sigma Pi Haunted Haus. I was joining Theta Chi Epsilon sorority and was a tour guide for the charity event. James was a brother of Sigma Pi fraternity and came to help out after he got off work. One of my sisters that knew him introduced us and it was love at first sight. We started dating in January and were inseparable. We were even able to take some classes together during our time at Tech! James graduated in 2015 and was able to stay in the Houghton area with me until I graduated in 2017. We married in July of 2017 and just welcomed our first child, Nash, into the world in January of this year. We look back fondly at our time at Michigan Tech and wouldn’t change a thing about it as it has lead us to where we are now!