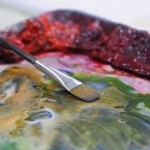 Now through Friday, Dec. 21, six graduating seniors who are minoring in art are displaying their work on the south mezzanine of the Rozsa Center for the Performing Arts. They are:

According to senior lecturer Sue Kilpela, the show features drawings, paintings and 3D work. “More importantly, these students display their commitment to the arts while achieving their other rigorous goals!” Kilpela says.

Licht and Schuleter also have art hanging in the State Representatives’ Anderson Office Building as part of the juried “Art in the House” project displaying work by Michigan’s fifteen public universities. 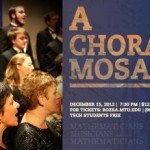 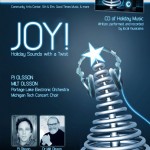 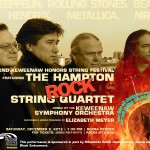 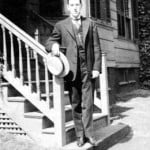 Growing from the fertile soil of the romantics and the symbolist poets, HP Lovecraft surpassed his predecessor, Edgar Allen Poe, in perfecting the classic horror story.

According to Director Roger Held, Chair, Department of Visual and Performing Arts, “‘Devising’ is the contemporary expression for the common theatrical practice of creating a performance from non-dramatic literature, or a script developed through the improvisations or written contributions of the actors. Such theatre pieces also provide design and performance challenges students don’t usually experience in educational theatre programs.”

Tech Theatre Company prepares for “The Horrors of H.P. Lovecraft”

The way the four mini-plays were performed was quite different from the norm. Two student narrators, Laura Larsen and Sean Miller, set up each piece as husband/wife hosts who welcomed us into their home before scaring us with their tales.

Jazz Showcase: Backstage at the Rozsa

See the Rozsa stage transformed into an intimate jazz-club atmosphere for the Jazz Showcase: Backstage at the Rozsa. 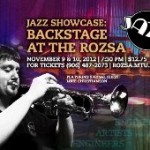 The Rozsa stage will become a jazz lounge with cocktail tables and cash bar, and of course hot jazz provided by two Michigan Tech jazz ensembles: the Jazz Lab Band and the Research and Development Big Band, with special guest performances both nights by Mike Christianson, the new Michigan Tech Director of Bands.

Backstage at the Rozsa: Jazz Showcase 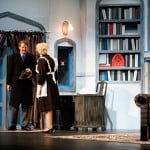 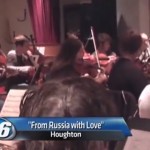 With the combined talent of over 60 musicians, the musical director says the goal of “From Russia with Love” is to tell a story.

“‘Sleeping Beauty,’ ‘Antar Symphony,’ the Shostakovich Symphony, the fascinating history of the mockery of the Stalin regime through a symphony. It’s a compelling program and a compelling educational program and its musical merit is very compelling,” Neves said.

Marquette’s Kaufman Auditorium Saturday, October 27 at 7 p.m.
Tickets $12 for adults and $5 for students 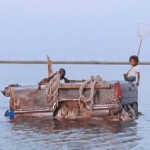 The 8th Annual Northern Lights Film Festival will be held November 1, 2 and 3rd in McArdle
Theatre on the Michigan Tech Campus. Featured this year are filmmaker Ray Tintori and the
award-winning dramatic film Beasts of the Southern Wild (Zeitlin 2012). Tintori headed up the special effects unit for the film and is a member of the independent filmmaking collective Court 13. Tintori will introduce the film on Friday evening at 7 p.m. and participate in a Q&A following the film. Beasts will be shown again at 9:30 p.m. on Friday. On Saturday at 2 p.m., Tintori will screen some of his short films and music videos and join in an informal discussion with students and festival-goers about independent filmmaking.

Other festival highlights include recent award-winning documentaries and narratives films including El Velador (Natalia Almada, 2012), The Interrupters (Steve James, 2011), Only the Young (Elizabeth James and Jason Tippet, 2012) and The Arbor (Barnard, 2010). The festival will conclude with Lynne Ramsay’s We Need to Talk About Kevin (2011) with Tilda Swinton and John C. Reilly.

The Northern Lights Film Festival is sponsored by the departments of Humanities and Visual and Performing Arts and Cin/Optic Communication and Media Enterprise Team. It is free and open to the public. For more information, please contact Erin Smith at smitherin@mtu.edu or (906) 487-3263. Michigan Technological University is an Equal Opportunity Educational Institution/Equal Opportunity Employer.

The full schedule and information about the films are available at: http://hdmzweb.hu.mtu.edu/wp/nlff2012 or visit the Humanities Department website http://www.mtu.edu/humanities quick links section.

Read more at the Michigan Tech Lode, by Nicole Iutzi.

The Board of Control recognized three longtime employees for a total of 128 years of service to the University. Among them was Mary Ann Beckwith, who gave 39 years of service.