When did You Become a Husky?

The spring 2019 student commencement speaker was Monica Brechting. Like many Michigan Tech students, Monica is not the first in her family to come to Tech. In fact, when she received her BS in Mechanical Engineering this spring, she became the twelfth member of her family with a degree from Michigan Tech. Monica gives a particularly insightful glimpse into what it means to come to Tech and to face the challenges and triumphs that make someone a Husky. Her speech can be found here, and there is a transcript below with highlights that may resonate with other Huskies. Please feel free to comment and tell us things that made you a Husky.

Thank you, President Koubek, it is a true honor to be able to speak to all of you today, my class, my friends, and my family. 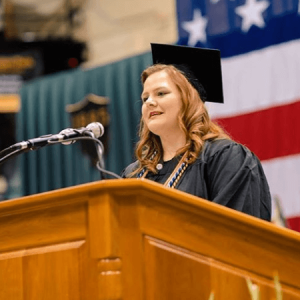 What made you a Husky?
Did you become a Husky when you got your acceptance letter?
Perhaps a Husky was made by attending University Welcome,
or by not reading the assigned O-week book.
Did you become a Husky during your first meal in the dining hall—
Or during your first K-day, when you signed up for 15 student orgs and joined none of them?
Was it when you shook Dean Gorman’s hand?
The first time you experienced the Huskies Pep Band?

Oh! Perhaps you really belong the first time you have to wait over 5 minutes to sign into a campus computer,
or by complaining about global issues.
Maybe you became a Husky the first time you slept through class.
Was it the first time you ditched homework to play video games? You know, maybe we were all made into Huskies during that hour-long power outage in the dorms freshman year, when we all poked our heads out of our rooms to complain about our lost work.

Maybe a Husky was made when you saw your first snowfall on campus.
This is Houghton, so maybe you belong when you can say words like Pann-u-kakk-u and Sauna.
Or when you have your first pasty and realize they really do taste better with gravy instead of ketchup—a hill I am personally willing to die on.
Is it when you heard your first unironic Yooper ‘hey’ in the wild?
Or was it the Sisu that brought us together when the area was damaged by the Father’s Day flood?

The first time you climbed the hill to the SDC or St. Al’s… maybe a Husky was made when Father Ben or Father Dustin handed you a hotdog during Senior Walk.
Or the first time you fell on the ice coming down the McNair hill?
Going to Fall camp, snowshoeing…
Maybe it hit when you walked in the Parade of Nations,
or when you sat in on your first “American Sports 101” class
or during course registration—when you saw your classes fill up two days before your registration time.

Are Huskies made during late nights in the library,
During your first all-nighter before an exam?
Or maybe it was moving off campus.
When you had your first serious thoughts of dropping out?
That mid-college crisis, and the first time you stopped to ask yourself, “Why am I even here??”
When you switched your major,
Or during that call to your mom, when you tell her you just really want to take a victory lap and stay for a fifth year.

Speaking of calls to your mother, I’d like to take a moment and say thank you from the bottom of my heart to my parents and siblings for supporting me and not disowning me for calling each one of you every single day. You’re the reason I can be here today.

Did you become a Husky during your first hockey game?
Or when you watched the football team win the Miner’s Cup from Northern for the first time, or the second time, or maybe the third time, or even the fourth time… You know, this was actually the ninth year in a row that they won the cup.

Did you become a Husky by turning 21, going to pitchers, stopping by the club for karaoke?
Or maybe shoveling your car out when you’re already running late for class?

Was it when Dean Gorman told you to wear a hat?
Your first snow day, your second snow day, your THIRD SNOW DAY?
Going snowboarding during those snow days.
Maybe you became a Husky when you made your first friend, or when you fell in love.
Or when you visited Breakers or Prince’s Point, or the northern lights, or the stargazing, or the bonfires.

Was it when you received the Order of the Engineer—when you realized that this is where your education brought you?
Maybe you are really becoming a Husky right here and right now—when you put on your cap and gown, sit in these chairs, and get your empty diploma cover.
Besides, what can be more quintessential “Husky” than graduating on NATIONAL STAR WARS DAY?

Maybe it hasn’t happened yet. Maybe it will be when you tell a coworker you went to MTU and they say “Oh yeah that’s the one that’s way up there.”
When you look around your office and realize half your team called in because there was a “Snowmageddon,” with a whole two inches of snow on the road.

Are average people forged into Huskies through all of these experiences we share? Or maybe we were just born “crazy smart.” Maybe the world has been calling for us to be Huskies since birth, just waiting for us to howl back.
Congratulations, Class of 2019, and May the Fourth be with you.

Please share anything that you think made you a Husky.

13 responses to “When did You Become a Husky?”