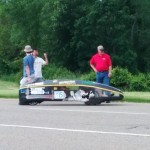 The Michigan Tech Supermileage Systems Enterprise took fourth place at the SAE Supermileage Challenge. Rick Berkey, advisor of the Supermileage Systems Enterprise says, “I wanted to share our competition results as many of you have had a hand in the team’s success, whether it’s providing administrative support, help with fundraising, shop and lab support, technical guidance on projects, etc. I’m very proud of this team for what they accomplished and HOW they accomplished it…demonstrating excellent teamwork, integrity, and resourcefulness. Like many competitions, we were challenged on a few safety issues the judges had concerns about, working late into the evening to address them successfully. Of course we also had a lot of fun!”

Berkey says the vehicle was completely new that took two years to design, build, and test. Nothing from the 2013 vehicle was reused and thus it was a major design effort, with the team logging over 5,000 hours (yes 5,000) over two years!

Summary:
29 teams competed in this year’s event, including teams from Canada and the US. Of those 29, 23 made it successfully through technical inspection, and 18 were able to make qualifying fuel economy runs
We were one of only 3 teams eligible for the Endurance Award, which requires a minimum of 4 qualifying fuel runs…BYU earned the award based on higher mpg We were one of only 2 teams with throttle by wire…made possible due in large part to our multidisciplinary team of EE, CpE, CS, and ME majors Our combined verbal/written design report score was 360 out of 450 possible…in the top 1/3, and we know what to do to improve further Tech placed 4th overall with a top mileage of 793 mpg, improving on our 2013 performance of 758 mpg. Check out the official results. We also had the opportunity to be part of a local alumni event on Thursday evening (thanks Kay!) and presented our vehicle to about 12 MTU alumni, including two Supermileage alumni from 2013.

For next year, we’ll be entering the Shell Ecomarathon Americas competition for the first time…a bigger event that will give Michigan Tech more exposure, and an opportunity to demonstrate our new battery electric vehicle (BEV) architecture which is not allowed in the SAE competition. But for now, I think we’re all ready for a nice break over the summer!