The Enterprise Program at Michigan Tech has increasingly gained national recognition for its ability to provide students with the experiential training and real-world problem-solving that industry wants. Recruiters at the Career Fair recognize Enterprise as a program that prepares undergraduate students for careers in industry by focusing on collaboration, cross-functional teamwork, and leadership. That recognition has expanded to a global level, with the recent job offer to Enterprise student Mario Calabria from Boston Scientific’s facility in Galway, Ireland.

Mario Calabria is a member of the Innovative Global Solutions (IGS) Enterprise and a Mechanical Engineering student at Michigan Tech. IGS focuses on designing affordable products for developing countries through research, reverse engineering, and testing. Members of IGS will take an idea from initial concept to final product through interdisciplinary teamwork and human-centered design thinking. By working with other organizations and programs on campus such as the Pavlis Honors College Global Leadership Pathway, Peace Corps, and International Senior Design, IGS team members are able to personally deliver and implement their products in country.

Calabria collaborated on an IGS project to redesign a low cost ventilator for deployment in third world countries. A typical ventilator costs tens of thousands of dollars and is not a feasible option in economically poorer regions of the world. Calabria, along with his IGS teammates, have been developing a ventilator that performs the same basic life-saving functions, but at a much more affordable price of under $2000. The current IGS team continues to improve on and enhance the ventilator through collaboration with a Ghanaian University and hospital.

Calabria highlighted his Enterprise experience while he was seeking to secure an internship with Boston Scientific, “I learned a lot about myself, how to motivate people, how to set group goals, and how to move everybody in the same direction at the same pace.” The leadership role that Calabria took on through the IGS project work was of particular interest to the recruiters at Boston Scientific. Calabria accepted the internship last summer, which allowed him to get to know Boston Scientific employees and expand his professional network beyond the Michigan Tech campus.

Calabria’s mother was born and raised in Galway, Ireland, and following the internship with Boston Scientific, Calabria and his family were getting ready to travel to Galway for a family reunion. Calabria reached out to some of his contacts at Boston Scientific and was offered the opportunity to interview and tour the facility in Galway, Ireland. Following the interview, Boston Scientific offered Calabria a full time position in Ireland serving the cardiovascular group that manufactures drug-eluting and biliary stents. Calabria recalls speaking about his Enterprise experience during the interview process, “I do think it played a significant role in my being offered a position.”

Calabria is also a lieutenant on the Michigan Tech Emergency Medical Services (EMS) team. Calabria’s EMS training was put to the test last Thanksgiving when his father suffered a heart attack while mountain biking the Tech trails. Calabria’s quick thinking and the responsiveness of the Tech EMS team saved Mark Calabria’s life. Mario Calabria is expected to graduate this December and is looking forward to his future career with Boston Scientific in Galway, Ireland.

Add Enterprise and Pavlis to Your Handshake Profile

Career Fair is almost here! Time to update those resumes and practice your introductions. Have you set up your Handshake profile yet? Handshake is a university platform designed to make it easy for students to find and apply for internships and jobs. Handshake also enables employers and recruiters to find the best talent their companies are looking for. The Pavlis Honors College and The Enterprise Program are listed as Organizations/Extracurriculars. If you’d like to learn how to add these to your profile so that employers and recruiters can easily search for you, please read on.

While on your home profile page, click on ‘Add Work Experience’ in the top left of your screen. Scroll down and click on ‘Add An Organization’. 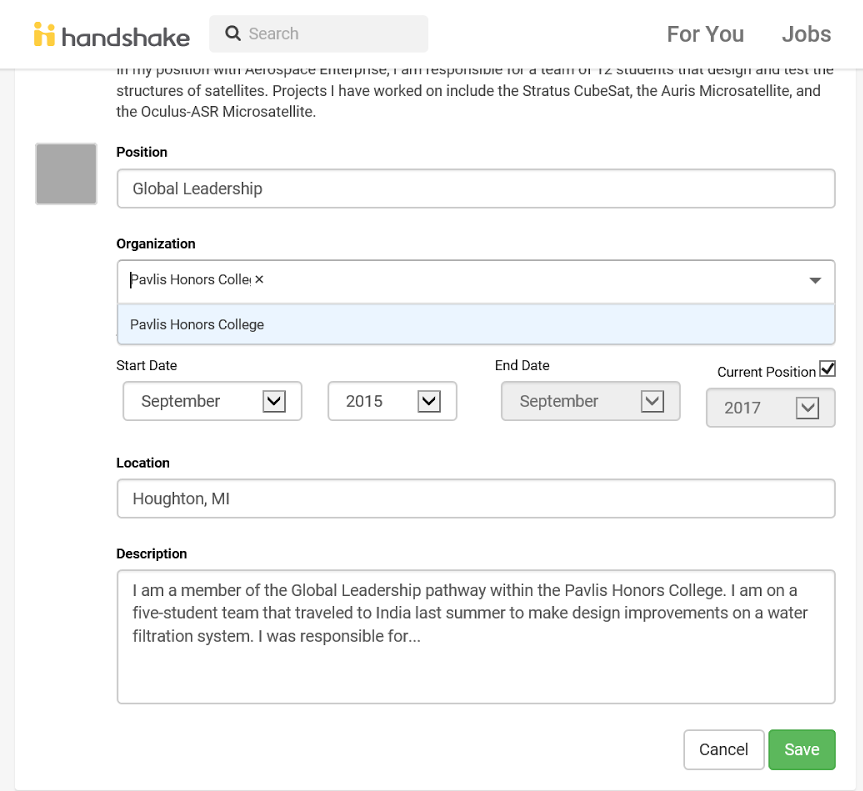 After saving your Organizations/Extracurriculars, your page will look like the screenshot below. 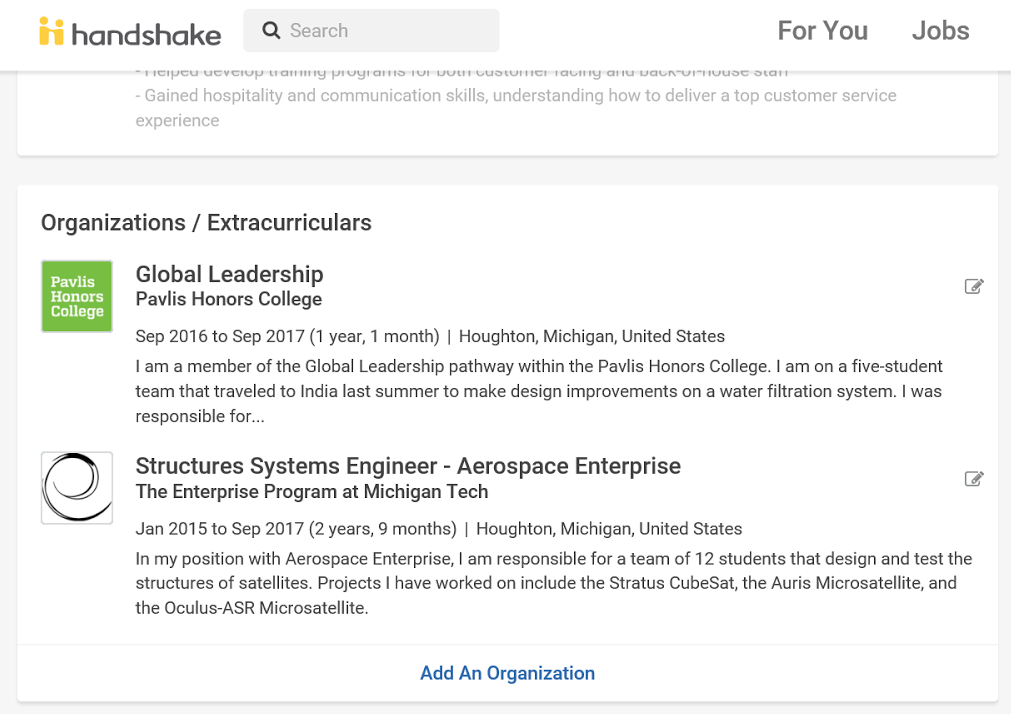 Handshake also allows you to add social links to your profile. If you are a member of the Pavlis Honors College and would like for recruiters and employers to be able to view your Seelio profile you can link to it from the ‘Social Links’ section in the bottom right corner. Click on ‘Add Your Own’ and enter your Seelio profile URL here. Make sure that your profile is public. Enterprise students may wish to add their Enterprise team website here as well. 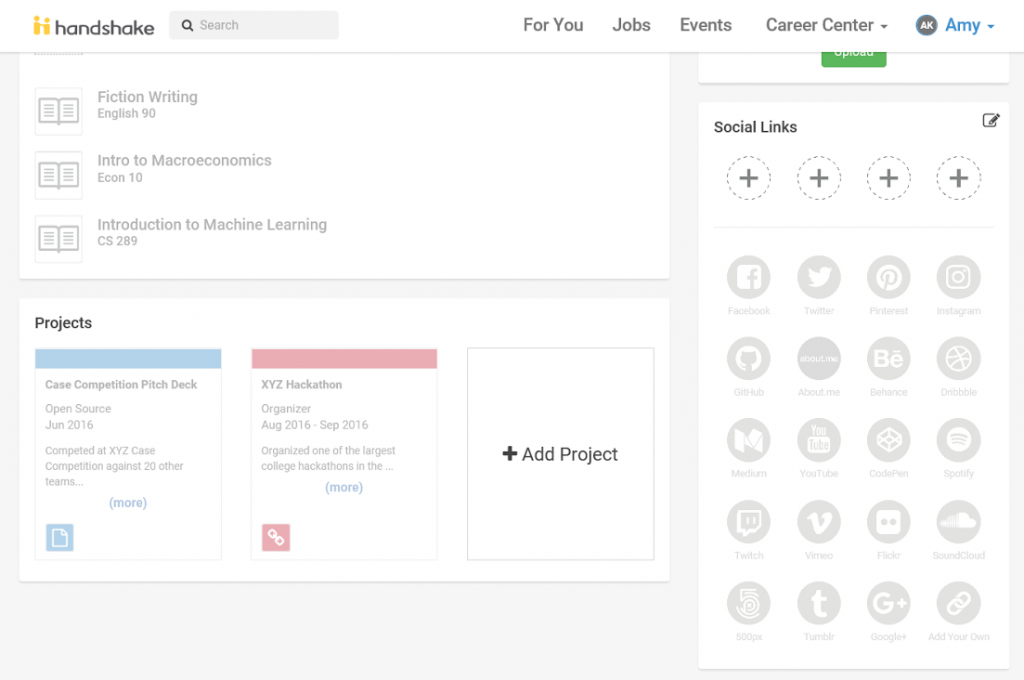 The Handshake Genius Bar will be on campus all this week in room 220E of the Administration and Student Services Building. Stop by to find job postings, learn about events, post your resume, and sign up for one-on-one career advising. Need help setting up your Handshake profile? Stop by Career Services for help. 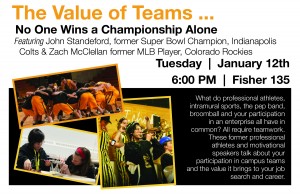 Two former athletes, who now present on college campuses throughout the nation, have added Michigan Tech to their list of places to present.
John Standeford, former Super Bowl Champion – Indianapolis Colts and Zach McClellan – former Colorado Rockies National League champion will be in Houghton to talk about the value of teams and how your participation in extracurricular activities can bring success to your job search.
Don’t miss this opportunity to meet two former athletes who might make a difference in your life and career!
career, guest speaker, job, teams, teamwork, value
Continue Reading →
Subscribe