Highlighting Your Enterprise Experience on Your Resume and to Recruiters 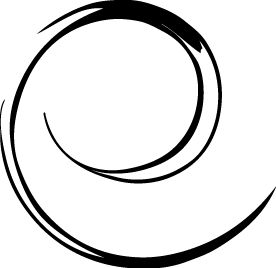 Join E.B. Mayer and Heather DeJong on Monday, February 19th from 4-5:30pm in M&M 722 as they discuss their experiences mentoring Enterprise teams and recruiting technical talent at various universities. They will also focus on areas of student Enterprise experience that are of particular interest to industry.

E.B. Mayer is an accomplished Agile and DevOps Information Technology transformation strategist and thought leader with over 15 years of experience across multiple industries and fortune 500 companies. Heather is an energetic and experienced IT and Operational leader recognized for developing talent, building strong teams, and driving results across a broad spectrum of capabilities.

This event is open to everyone on campus. Students enrolled in the Enterprise Program or considering joining an Enterprise team are encouraged to attend.

The Enterprise Program at Michigan Tech has increasingly gained national recognition for its ability to provide students with the experiential training and real-world problem-solving that industry wants. Recruiters at the Career Fair recognize Enterprise as a program that prepares undergraduate students for careers in industry by focusing on collaboration, cross-functional teamwork, and leadership. That recognition has expanded to a global level, with the recent job offer to Enterprise student Mario Calabria from Boston Scientific’s facility in Galway, Ireland.

Mario Calabria is a member of the Innovative Global Solutions (IGS) Enterprise and a Mechanical Engineering student at Michigan Tech. IGS focuses on designing affordable products for developing countries through research, reverse engineering, and testing. Members of IGS will take an idea from initial concept to final product through interdisciplinary teamwork and human-centered design thinking. By working with other organizations and programs on campus such as the Pavlis Honors College Global Leadership Pathway, Peace Corps, and International Senior Design, IGS team members are able to personally deliver and implement their products in country.

Calabria collaborated on an IGS project to redesign a low cost ventilator for deployment in third world countries. A typical ventilator costs tens of thousands of dollars and is not a feasible option in economically poorer regions of the world. Calabria, along with his IGS teammates, have been developing a ventilator that performs the same basic life-saving functions, but at a much more affordable price of under $2000. The current IGS team continues to improve on and enhance the ventilator through collaboration with a Ghanaian University and hospital.

Calabria highlighted his Enterprise experience while he was seeking to secure an internship with Boston Scientific, “I learned a lot about myself, how to motivate people, how to set group goals, and how to move everybody in the same direction at the same pace.” The leadership role that Calabria took on through the IGS project work was of particular interest to the recruiters at Boston Scientific. Calabria accepted the internship last summer, which allowed him to get to know Boston Scientific employees and expand his professional network beyond the Michigan Tech campus.

Calabria’s mother was born and raised in Galway, Ireland, and following the internship with Boston Scientific, Calabria and his family were getting ready to travel to Galway for a family reunion. Calabria reached out to some of his contacts at Boston Scientific and was offered the opportunity to interview and tour the facility in Galway, Ireland. Following the interview, Boston Scientific offered Calabria a full time position in Ireland serving the cardiovascular group that manufactures drug-eluting and biliary stents. Calabria recalls speaking about his Enterprise experience during the interview process, “I do think it played a significant role in my being offered a position.”

Calabria is also a lieutenant on the Michigan Tech Emergency Medical Services (EMS) team. Calabria’s EMS training was put to the test last Thanksgiving when his father suffered a heart attack while mountain biking the Tech trails. Calabria’s quick thinking and the responsiveness of the Tech EMS team saved Mark Calabria’s life. Mario Calabria is expected to graduate this December and is looking forward to his future career with Boston Scientific in Galway, Ireland. 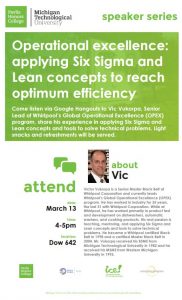 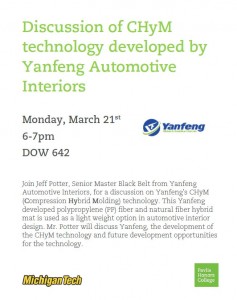 Consumer Products Day is being held on Friday April 8 & Saturday April 9 and we’d like to offer an “Enterprise Challenge” to all other enterprises to create a team for this event.

Cash prizes (1st place teams $2,400, 2nd $1,600 and 3rd place team $800) are available to the winning teams. See the attached info for more details or visit our website.
Here’s how it works:
Students work in self-selected teams from a variety of majors and will be given a box of products from company reps to recreate or redesign these products for use in other ways. A great example of this is the Post-it note. It was invented solely by accident (read about it here). This Shark-tank style event will feature company reps who challenge students to come up with a new business idea from use of their products. This event, sponsored by Career Services in collaboration with Consumer Products Manufacturing Enterprise (CPM) features four companies on campus for the event; Amway, Kimberly Clark, Dow Chemical and 3M.

In order to promote the event, we are asking that you share this information with your enterprises. Students from the CPM Enterprise are also available to attend your enterprise meetings for maybe 5 minutes (start or end of meeting) to explain the event to your students. If you are interested in this, please contact Shelley Farrey mafarrey@mtu.edu in Career Services or Matthew Manning mmanning@mtu.edu of CPM Enterprise to coordinate your meeting time. 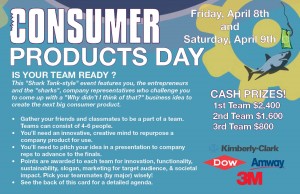