Like many others, we discovered this one after bringing the next generation of Tech Toots up to God’s Country: Estivant Pines. Let the place encompass you. The time flies by. The serenity is palpable.

This June, for the third year running, my brother Steve George (ME ’98) and I have brought some of our older kids up there to ride the trails in the Keweenaw. We are just recreational riders and it’s as much about seeing the sights of the area and showing our kids how beautiful the peninsula is as it is about riding trails.

Some places are only reachable by trails, though, too. Our favorites:

This year we might be able to go to the top of Douglass Houghton Falls, as we hear that is again public land. We no more than leave one year and we’re already looking forward to the next!

Hi, Sarah. All the best to you and your family, on your move back to Tech. I was in graduate school, the summers of 1987 and 1988 (metallurgical engineering), and my parents vacationed both of those summers, in the Houghton area, so we could spend time together. On an almost daily basis, we would end up at McClain State Park, to – you guessed it – watch the sun set, over Lake Superior. Fond memories, to say the least, so my Copper Country favorite would have to be sunsets at McLain.

McLain State Park has to top my list. There was a time when you could drive onto the beach from the breakwater, which I did and nearly got stuck in the sand. It was a gathering place where beer and pasties were enjoyed, as well as a quiet place out of the way for contemplation and study. Had a burlap bag with a rope to shore to serve as our refrigerator and in what some may call foolish moments, Lake Superior was a place to swim. The most memorable time was a night before classes began in the fall, late September then, and when we put the fire out it was so dark we could not see to make our way through the woods to the parking lot.

Here are a number of places I enjoyed visiting in the Copper Country when I was a kid and when I was at Tech:

Drive to Copper Harbor through the trees.

Isle Royale – I would go on the Ranger III for a week, but you can also go on the Isle Royale Queen for a day. I camped out there for a week with a canoe and a tent when I finished my sophomore year at Tech.

Bishop Baraga Shrine – It is a bit out of the way, but worth the stop.

The George Gip Monument in Laurium

I thought I would add a couple of suggestions for your Keweenaw bucket list segment. Some of my favorite activities while at Tech included:

If you continue on the road going past Bare Bluff to the dead end you come to a trail on state land where you can hike on a trail (relatively easy walking and not to long) to Montreal Falls (favorite waterfall in the Keweenaw, road can be sketchy) which fall into Lake Superior. Follow the trail along the river to the upper falls too.

Hiking at Hunters Point in Copper Harbor is nice

Estivant Pines is worth a hike

Waterfall hunting, the Keweenaw has a lot of waterfalls with the fault line running up it. Hungarian falls was popular when I was in school but there are a ton more. A topo map is helpful. Any sharp elevation change with water should have falls. Some are small, others are large. All provide a great escape.

Birding is great if you are into that. The peninsula actually has a bunch of boreal species that birders typically have to go to northern Minnesota or Canada to find.

Aurora Borealis watching, there are countless spots to watch from

Historic places (there are a ton of really cool sites worth visiting from the fort in Copper Harbor, the Calumet theater, the manor houses, etc.)

Seaman mineral museum is worth going to at least once even if you aren’t into rocks/minerals.

I have so many good memories from exploring the Keweenaw. These are just a few of many adventures that made my time at Tech wonderful.

Good luck with your bucket list! I can’t wait to read about other students spots/locations.

I would like to nominate the Gay Bar in Gay. In the early 50s when bird hunting in that area we always stopped in for a beer and to catch up on the local gossip.

A few years ago I was on a bicycle tour with a bunch of folks mainly from Lower Michigan and out of state. We started from Baraga and pedaled our way to Copper Harbor. Next we were scheduled to head down the south side of the peninsula to our camp site at the Lake Linden High School. I knew we would be passing through Gay even though it wasn’t on our route maps. And, of course I knew gay meant something different in my Tech days then it does now. So I was interested to see the reaction from the group as we came upon the Gay Bar sign. Sure enough they couldn’t pass it up. It was early in the day and a couple of locals were nodding over their beer at the bar when all these folks in brightly colored Lycra filed in. In a dark corner was an old dust-covered piano and one of the guys was an entertainer from Chicago and he quickly started banging out tunes that everyone knew and even the locals enjoyed the party.

I am the former Janet Krenitsky, class of 1970. I am currently in Florida recovering from right knee replacement.

One of my favorite things to do at this time of year in the Copper Country is to travel up the Keweenaw to Eagle River and see the deer come into feed in the park. The park is surrounded by cedar trees which is a food of the white tail anyway but local people have put down hay for them too. You get to see many white tail at one time. You can pull your car up close and watch. See all the fawns romp around. It is fun to guess which ones are female and which ones male.

I was a varsity skier in my youth and loved Mt. Ripley. Now I think cross country skiing will be more my taste after I am recovered. Enjoy the Copper Country. I saw some earlier pics on Facebook from the Eagle River falls during the melt. Wow what gushing and Jacob’s Falls by the Brothers of St. John Cathedral too.

I will be returning in May to spend the warmer months at my home on the East side of Portage Lake.

Welcome and glad to read your article

In the summer, go west to Misery Bay. It’s the only place relatively close by where the water in Lake Superior is bearable to swim in. The beach is worth the drive.

First, welcome aboard, I’m sure you’ll enjoy the ride. 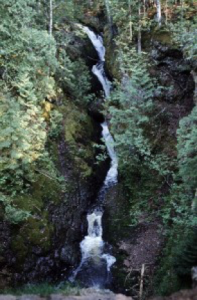 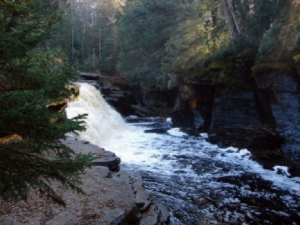 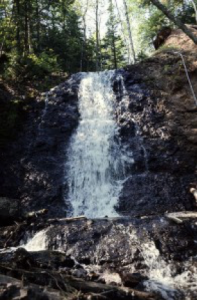 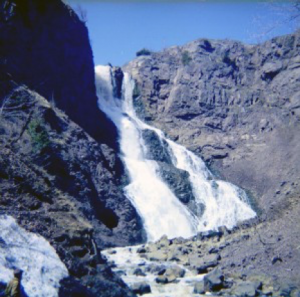 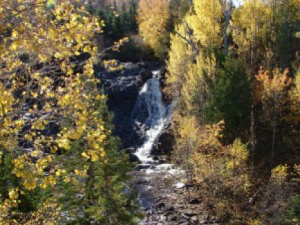 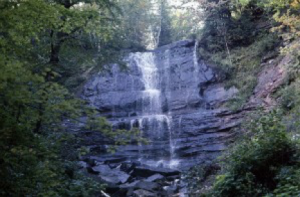 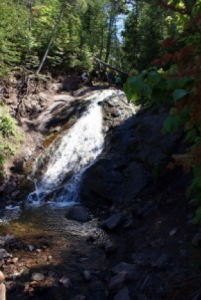 Second, you asked about ideas for thing to see in the area.  Well I would recommend the various waterfalls and lighthouses.
And with that in mind, here’s some to get you started:

Douglas Houghton Falls near Eagle River taken in May 1966 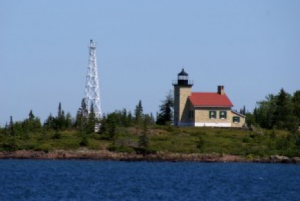 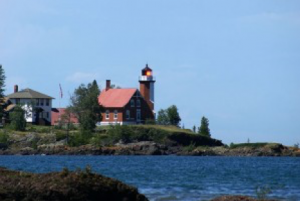 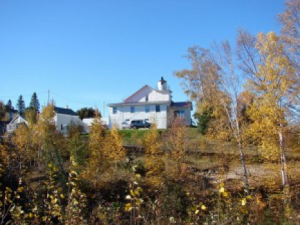 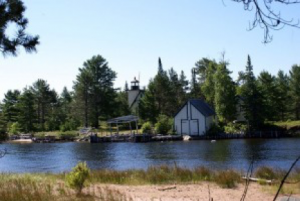 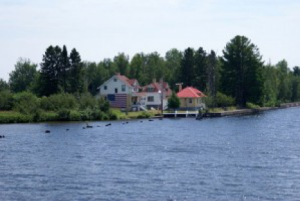 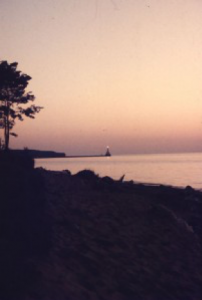 As for the lighthouses:

Anyway, that should get you started.

Several of my favorites, as a Toot:

Cedar Beach off the end of Calumet Water Works Road.  In the early 70s there was typically no one there and I could walk for hours searching for agates and prehnite. Alone. Peace and quiet.

The Sturgeon River near Chassell. I had a canoe and would take a friend and launch at a small town park upriver and paddle down to the Hwy. 41 bridge near the bay. Again, peaceful, quiet, and rejuvenating.

Mt. Bohemia. In the early 70s there was a rutted 2 track road to the top to the fire look-out tower. Hiking from the bottom was the best and night was even better. My date and I hiked up one very windy fall night and were surprised when we reached the top to see 2 (maybe 3?) lake freighters holed up in Bete Gris Bay apparently to get out of the rough Lake Superior waves. The next morning we got news of the Edmund Fitzgerald. “The gales of November come early…”

The Cliff mine dumps.  We used potato rakes to rake through the material on the dumps, pulling it down from above us and finding “chisel chips” of pure native copper, carved out of the mine in the 1850s and 60s. We also found pieces of Meerschaum pipes left by the Cornish miners of the day.

The Quincy Mine railroad grade. I rented bearpaws (snowshoes) and started from the Mine site on a mid-winter Saturday in 1972. I shoed down the railroad grade toward Dollar Bay – the route that copper ore would have taken from mine to mill. At one point I fell and literally had to swim to a small tree to pull myself upright again.  he snow was so light and so deep I had nothing to push against to get stood up.  Using a walking stick I found I was shoeing in 5+ feet of Copper Country powder. Totally awesome!!

This is why it took me 5 years to leave Houghton.  This and a cute ME-EM Masters candidate that captured my fancy.

Glad you asked. In my two stays at Tech, 1950-51 and 1956-59, we had two favorite places. One was the Hungarian Falls and the Douglass Houghton Falls. Both great places at any time of year. The other fun place was any rock pile, looking for copper nuggets and any other mineral that caught our eye. Both of these great recreational activities were free and a great way to spend a Sunday afternoon. (Agate hunting after a storm was a close third.)